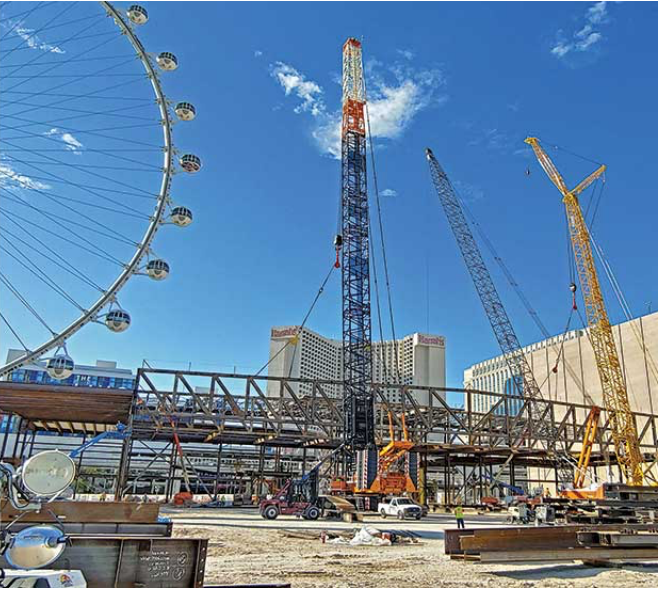 The Caesars Forum team places a truss in February.
The building is in the shadow of the High Roller observation and casino.

Located in the former parking lot, Caesars Forum will total more than 500,000 sq ft when completed in early 2020. The facility will have not one, but two massive column-less ballrooms arrayed west to east. Both ballrooms will have movable dividers to split the space if necessary. The west ballroom is steel pier construction and a single story. The east ballroom will be similar, but with underground area for parking and storage. Total size of the flexible meeting space in the combined ballrooms will be about 300,000 sq ft. There are also two smaller ballrooms.

The general contractor is The PENTA Building Group, the architect is The Friedmutter Group, the structural engineer is John A. Martin and Associates and the steelwork is being performed by SME Steel.

Caesars Entertainment sought to set the structure apart from the competing conference centers not just for a good selling point, but also to deliver a superior experience, says Howard Tribble, the company’s senior vice president for design and construction.

“We want to be able to book and have the largest of the large companies at our facility—the likes of Google and Apple,” Tribble says. “These are the types of facilities they are demanding.”

“This is like picking up half a railroad bridge and placing it in 30 minutes.”—William Penny, Site Safety Manager, SME Steel

The building will measure more than 375 ft wide, more than the length of a football field. Ballrooms are 315 ft wide. Floor-to-ceiling height is 30 ft, with ballroom-level finishes including chandeliers.

Tribble says when they first began developing the project about two years ago, Caesars Entertainment envisioned a three-story facility. After working with the design and construction team, though, about a year ago the team opted for a one-story design.

Either way, cranes would prove critical to the project, and the team reserved the necessary equipment early during development, Tribble says. Dielco Crane Service of Las Vegas is the crane company on the project and is providing cranes and operators.

“We knew this was going to be a huge undertaking,” Tribble says.

Construction means and methods make the scale of the project a manageable wonder, says Steve Jones, vice president of field operations for The PENTA Building Group.

“The building is only four rooms and they hold seven football fields,” he says. “That is the amazing part of it. It’s just massive.”

Designing, creating and installing the trusses required the creativity of the entire construction team.

SME Steel fabricates the trusses in one piece at is shop in West Jordan, Utah, before cutting each truss into five sections. Those five sections are then cut horizontally creating a total of 10 segments that are hauled over highways on tractor trailers.

Once on site in Las Vegas, SME Steel crews bolt the sections back together using nearly 2,000 bolts per truss. Most of the bolts have a diameter of 2 1/4 in. Jones says the original design called for the trusses to be welded back together, but in an effort to expedite erection, SME Steel recommended bolted connections.

Each truss weighs about 275 tons including 20,000 lb of rigging. Each truss measures about 20 ft tall at the center and 17 ft at the ends. The bottom chord is made from W14-by-550 steel and the top chord as well as vertical and diagonal sections are made from W14-by-283 steel. Trevor Dishon, PENTA’s project executive, says each truss, when laying horizontally, covers about 6,300 sq ft. Six of the trusses are expected to be lifted into place by the end of March. Snow and wind in February delayed at least one lift. Work on the project started in late 2018. Crews made the first truss lift in January, and the construction schedule calls for about one lift per week.

“This is like picking up half a railroad bridge and placing it in 30 minutes,” says William Penny, SME’s site safety manager.

Contractors are using three cranes for each lift. Two of the cranes do the majority of the lifting work and a smaller lattice crane maintains stability, says Dishon. The large cranes are a Liebherr 1600 and a 1500. To settle and support the cranes’ position on the site, a 26-in.-thick, type-2 pad was prepared.

Dara Lesmeister, Caesars Entertainment’s safety manager for design and construction, says that one hour prior to each pick, SME Steel conducts a critical pick meeting to discuss important details and answer the crew’s questions. So far, there has not been a single recordable injury.

The trusses are also unusual in that they are designed with pick points about every 18 ft that allow exhibitors to hang material for marketing. Each pick point is rated for 2,000 lb. Each truss is connected with bar joists to support the roof. Todd Calvin, project director for Caesars Entertainment, says extra work on truss design saved approximately $6 million in construction costs.

While the trusses are literally the biggest element of Caesars Forum, modifying the existing floodplain to change the Federal Emergency Management Agency flood map was also a big-time challenge. Dishon says the elevation on the southwest corner of the site was raised 6 to 8 ft primarily by using dirt from the excavation of the east ballroom’s underground area. Since the late 2018, nearly 100,000 cu yd of dirt has been moved on the site.

To further address flood control, contractors constructed a flood wall on the property’s southwest side and will modify the existing flood control channel, Dishon says. Related permitting and approval processes for flood-control proved challenging as they fell under the auspices of several jurisdictions.

Beyond the pick points, a main design and construction element for future exhibitors are the 367 floor boxes with power, communications and data connections, Dishon says.

Permitting issues have forced a compression of the construction schedule to meet the 2020 deadline, turning an 18-month schedule into a 15-month schedule, Dishon says. To meet this timeline, work crews have been called on to perform double shifts, overtime and partial weekend work.