SME Steel is one of the largest fabricators/erectors of structural steel in the United States with over 400,000 square feet of fabrication facilities located in West Jordan, Utah, and Pocatello, Idaho, producing approximately 20,000 shop hours per week. Their shops utilize the most up-to-date, sophisticated equipment available in the industry. Supporting the structural fabrication shops are two miscellaneous steel facilities located in Phoenix and Las Vegas. This unique combination of products and services allows SME to provide the capacity to fabricate and ship in excess of 2,000 tons of structural steel per week working normal hours.

SME Steel maintains its own erection crews and on average has over 350 ironworkers on projects at any given time to ensure shipping, sequencing and fabrication are all in line with the requirements of the erection crews. Safety is a critical focus in all aspects of SME operations. SME works as an integral team member to facilitate budget management and design assistance in addition to offering value engineering to clients as part of the service package. 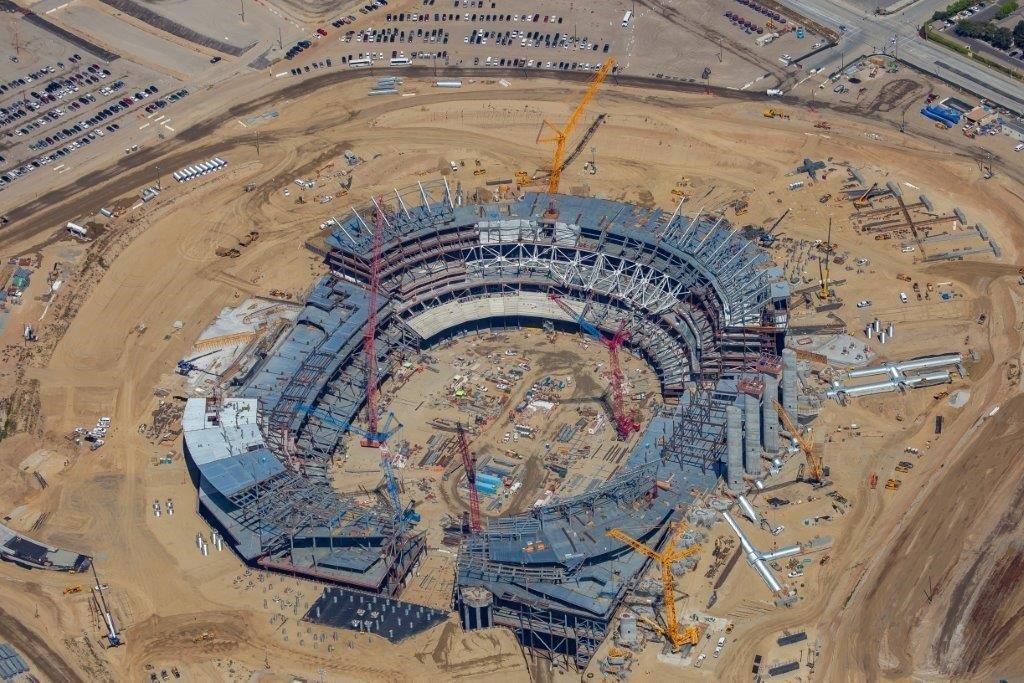 “Long before the first pick of the first column, daily constructability and logistics meetings occurred weekly with SME Steel and Southwest Steel, the entire construction team and the design team. The meetings would last 8-10 hours each day going over every aspect of the job with the end goal of not only successfully building the job, but also building it safely.”

On Jan. 12, 2016, the National Football League (NFL) approved Los Angeles Rams owner and chairman E. Stanley Kroenke’s plans for the world’s largest stadium complex in NFL history. Subsequently, Kroenke announced the joint venture of Turner | AECOM Hunt as construction manager of the open-air, ETFE roof-covered stadium and surrounding development: LA Stadium & Entertainment District at Hollywood Park (LASED). Later that year, SME Steel, Southwest Steel, and CoreBrace joined the design assist and construction team with the focus of structural steel for the bowl. The massive and complex master plan project encompasses 298 acres. The 3.1 million-square-foot centerpiece stadium rises from a depth of 100-feet below grade to a towering 130-feet above grade for an impressive total of 230 feet from field to rooftop and is the future home of the Los Angeles Rams and Los Angeles Chargers. The stadium features 70,000 open-air seating, which expands to 100,000. Adding to the impressive project is a 6,000-seat performance venue, 780,000 square feet of office space (with state-of-the-art event, conference, and meeting space), 890,000 square feet of retail space, 300 hotel rooms, 2,500 modern residences, and approximately 25 acres of public parks, open space, pedestrian walkways, and bicycle paths. The iconic destination and gathering spot for the world is already slated to host Super Bowl LVI in 2022, College Football Playoff National Championship in 2023, and the Opening and Closing Ceremonies of the 2028 Olympics.

“SME understands safety is dependent on multiple factors; however, considerable research demonstrates that organizational leaders play a critical role in influencing attitudes, actions, culture, and shared visions at all levels within the workplace. Dive in a little deeper and the research shows transformational leadership appears to be the catalyst for excellence in safety.” 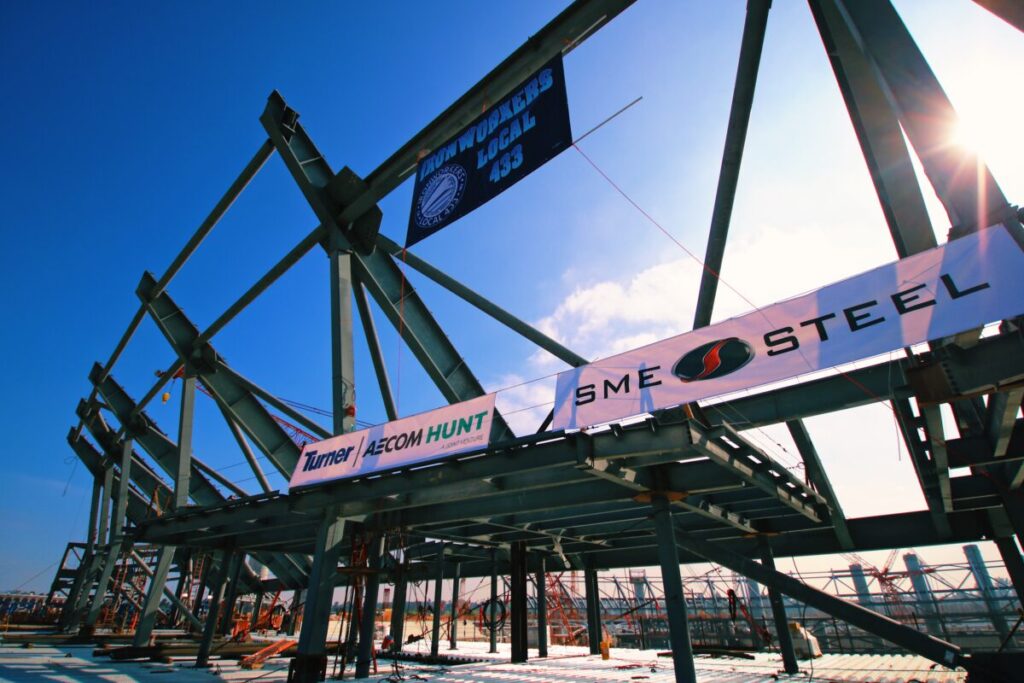 By definition, transformational leaders model high standards of moral conduct; provide inspirational motivation both above and below their sphere of influence; convey a clear and positive vision of the future state of the company; provide intellectual stimulation to encourage employees to be creative, take initiative and challenge norms; offer individualized consideration recognizing the unique skill sets and needs of employees; and, above all, demonstrate genuine concern for the welfare of all.

Long before the first pick of the first column, daily constructability and logistics meetings occurred weekly with SME Steel and Southwest Steel, the entire construction team, and the design team. The meetings would last 8-10 hours each day going over every aspect of the job with the end goal of not only successfully building the job, but also building it safely. Bill Deiter, project executive and team captain for bowl structures and enclosure, AECOM Hunt, led these interactive constructability, logistics and erection safety big-room meetings with a determined and focused mindset, which he successfully integrated into every single person in the meetings. The planning effort focused on each trade partner’s area of responsibility to enable increased efficiency while working out every conceivable challenge in the virtual world before it had any kind of an impact on the construction progress. Throughout every detail, Deiter consistently asked, “How do we build this and how do we build it safely? We looked at ways we could minimize critical picks and created a heightened level of scrutiny during the preplanning process for those that were unavoidable.”

According to the Bureau of Labor Statistics, industry-standard Recordable Incident Rate (RIR) for construction is 3.1 and structural steel is 4.9. With an RIR of 0.51 overall and 0.52 for structural steel, these are impressive enough numbers for the whole world to pause and take note. So, how did Marchesano, Evans, and every trade partner* come together to achieve this greatness? In a nutshell: transformational leadership. “There’s a lot of pride,” says Marchesano. “[You] look at the magnitude of what we’re building. That really brings everybody’s spirits up. Myself, personally, I just love coming to work every single day because of the change and the people we’re working with.”

“It’s all about building relationships. Without construction partners and construction employees, there are no projects,” shares Evans. Nothing is small on this project and task preplanning is critical to the success of each day’s work. For example, in August, 2018, crews breathlessly watched as the first piece of the canopy was skillfully hoisted into position. This 2.2-million-pound critical pick required one of the world’s largest cranes.

*Turner Construction refers to its subcontractors as trade partners and makes a concerted effort to treat them as such. 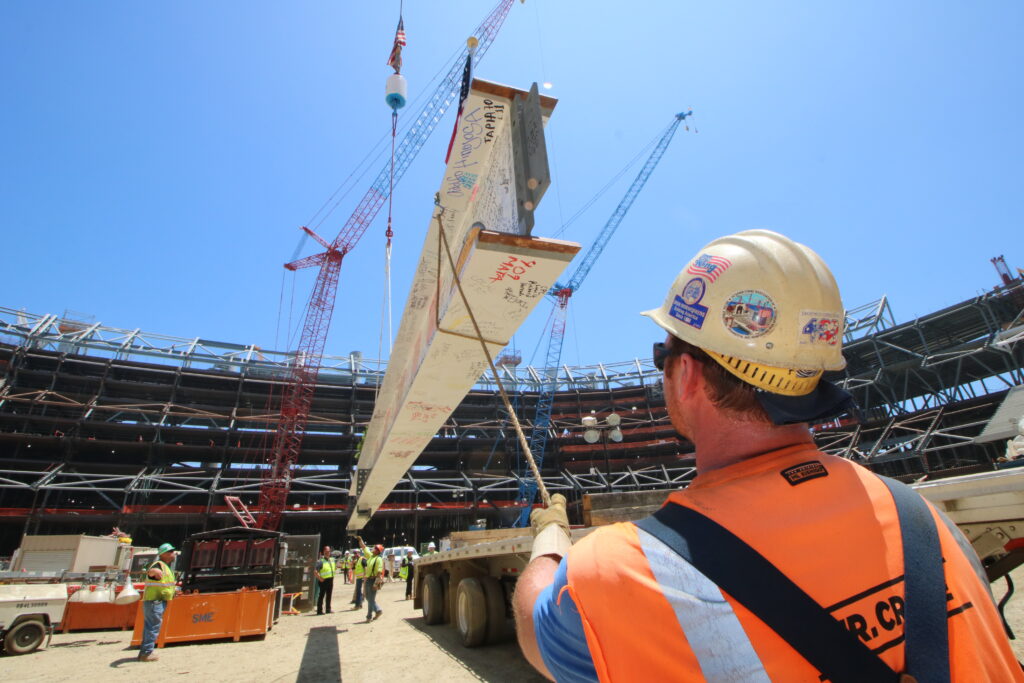 Construction never stops on the project; crews are working around the clock, seven days a week. What does a typical day look like for Marchesano? “I get here at four in the morning. I have [done that] my entire career, for several reasons. It’s a sign of respect to the workers. This is a tremendous team that is here. That trailer is full of people here at four in the morning committed to this job. Every part of this job is full of challenges, but we look forward to them.” Many hours later, Marchesano drives homes with expected phone calls and emails to answer before sinking into the luxury of sleep.

According to Evans, “We must maintain at least a two-month look ahead to anticipate changes across multiple levels in multiple directions.” The overall project safety team includes representatives from every trade with varying levels of participation. Evans adds that his team of highly-qualified safety employees, coupled with management support and the bonds they build together with all of their trade partners, makes the entire safety team’s success possible. “The end games for each trade are different; however, they share the same goals. We have some of the best superintendents on this project,” says Evans. “We are like a knife that’s being sharpened every single day.”

“When we leave here, I want the world to know this project created innovative ideas, one-of-a-kind design and things that have never been done before. Together we exceeded all expectations with a shared ownership of a unique project for the whole world to enjoy,” states Evans. Ben Wright, General Foreman, SME Steel, says, “Safety excellence is and has been implemented very well from foremen to apprentices. Everyone follows the rules, watches out for each other, and no one works alone.” One memorable moment for Wright on the project came during the erection of Zone 3. “It was pitch black with a pick that required the maximum-allowable capacity of the crane.” According to Wright, the detailed crane plan is the backbone for hoisting success. He adds, “It was impressive to see how much difficult iron went up in such a short time. Paul Breitenbach’s, the Area Superintendent for SME Steel, leadership was outstanding on this project.”

Tony Chavez, Plumb-up Foreman, SME Steel, defines excellence in safety as that which is achieved through evaluating task steps, equipment, and a constant awareness of the environment. “I assess the work for each day before my crew arrives, so I am prepared and able to set the expectations for the day,” says Chavez. “Our crews are cross-trained to jump in whenever and wherever needed. Training equals success equals no delays. We operate as a team.” Another synergistic highlight of the project is the goal for continuous improvement. For example, when new safety products were brought to the jobsite, feedback was requested from the men and women who use them every day. Often, revised designed products were brought back two days later. “Protecting workers and creating a safety construction environment with constant, continuous improvement requires companies to go beyond minimum safety rules,” says Paul Velarde, Superintendent, SME Steel. 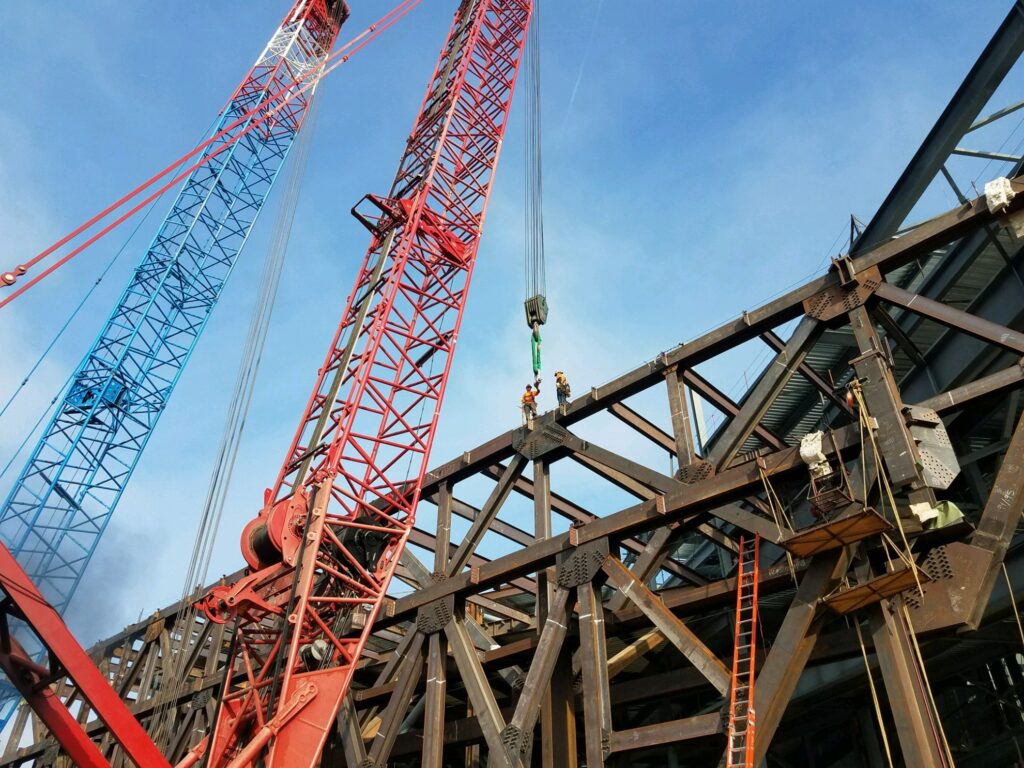 What’s a typical shift for an ironworker on the LASED project? From the outside, it appears as organized chaos comprised of superintendents, general foremen, plumb-up foremen, 145 employees, two raising gangs, welding crews, yard gangs, and safety crews who are monitoring shakeout, welding and rigging in multiple zones. From the inside, it’s a humming beehive filled with highly-skilled and dedicated workers. Every direction you look, there are multiple trades collaborating and working around one another. “I’m personally responsible for everyone who works for me. We are a team. We start the day together and end together,” says Jeff Torgerson, Superintendent, SME Steel.

James Jones, Superintendent, SME Steel, says, “It’s important to have a flexible mindset and be able to shift priorities at any given moment. There is a constant change in any direction due to the size and complexity of this project. We all make a conscious decision to work safely together—a collective expectation for one another. Through this, we met critical milestones and celebrated successes together—as a team.”

Further inspiration and motivation came from the top. “The positive feedback from Turner | AECOM Hunt was constant. They expressed their satisfaction with our team approach with the SME Steel and Southwest Steel teams in terms of production and safety. They truly treated us as a trade partner,” says James Rivera, Project Safety Manager, SME Steel. “Having such an outstanding safety record on this project is a testament to the effort put in by the SME Steel and Southwest teams.” 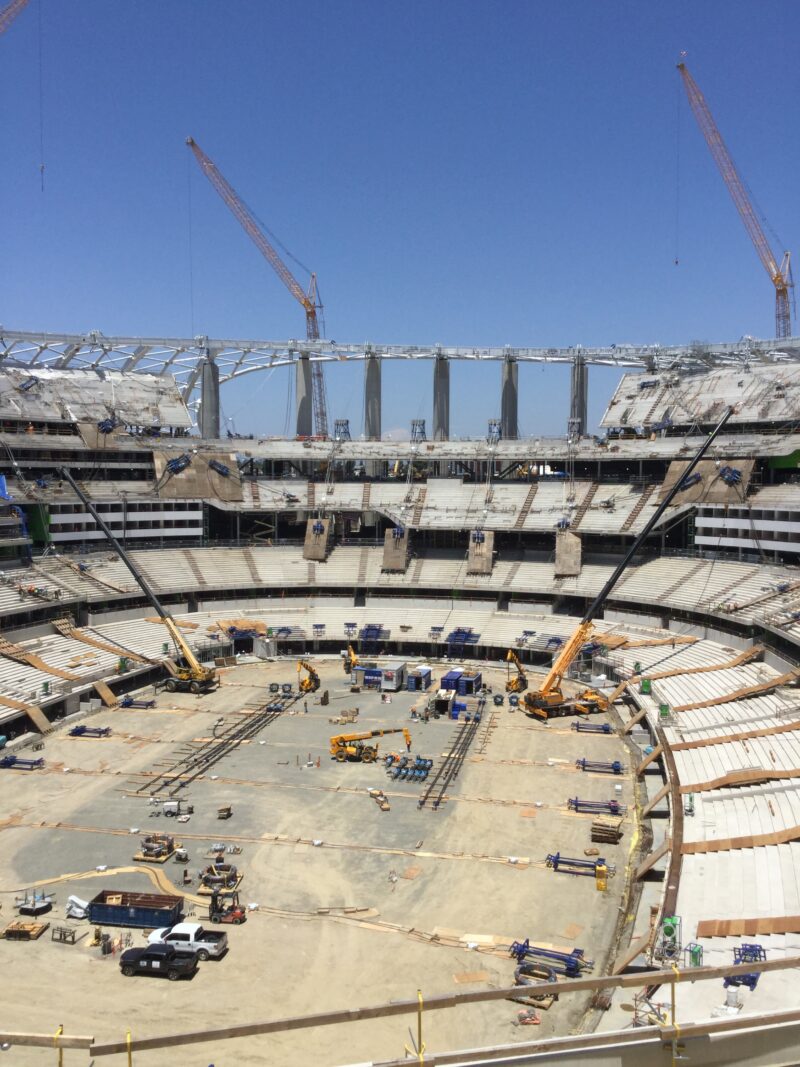 With a project this scale and size, there were challenges along the way. The erection plan was unique as the project. “For a long period of time, the project was treated as four separate buildings being erected at once. Each building (“zone”) had its own supervision team and structure led by Torgerson and Velarde; each with its own share of challenges. “The amount of planning that went into the truss erections was impressive—especially due to the fact that they were successfully erected per plan,” shares Breitenbach. “When it comes to safety success, SME and Southwest Steel achieved an unprecedented low incident rate. This is something we will always be proud of. The Local 433 ironworkers did an exceptional job representing all of us,” says Jason Vanderlip, Project Safety Manager, Southwest Steel.

AECOM Hunt is known for building epic sports venues. “We get such a charge out of building iconic structures and coming back to enjoy them with our families. But if we can’t do it safely and send everyone home to their families every night, there isn’t joy in the project anymore. We simply must build it safely,” says Deiter.

“Safety applies with equal force to the individual, to the employer, to the union, to the collaborating trades, to the contractor, to the owner, to the state, and at the highest level, to the nation. The safety record on the LASED project is something every one of us can celebrate,” says Weldon Mann, VP Safety, SME Steel. 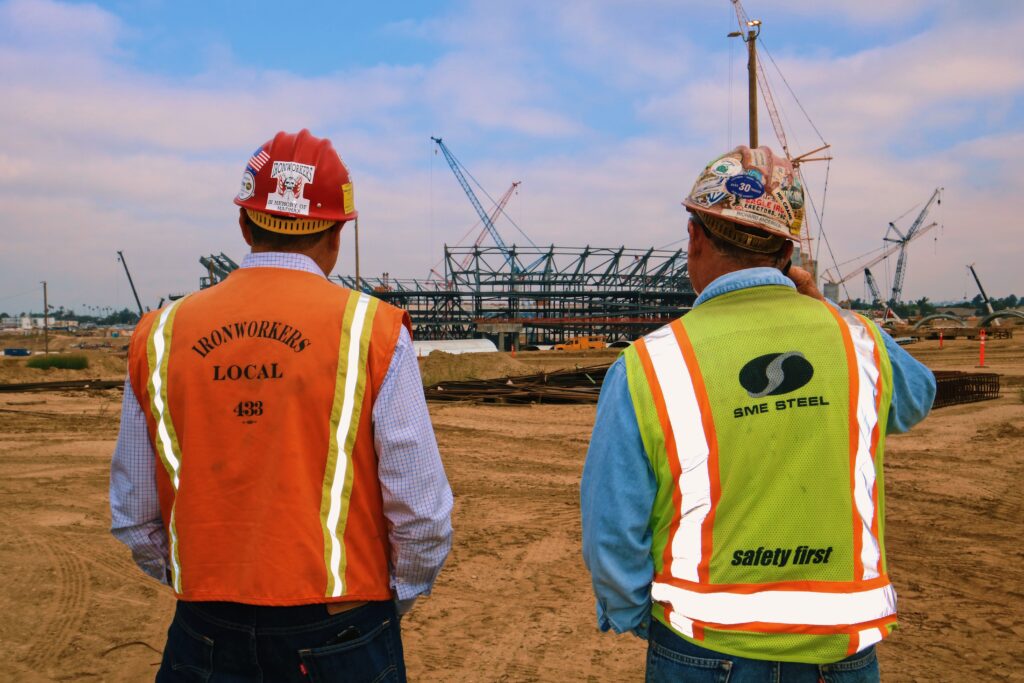 Ultimately, the transformational leadership of the Kroenke Group and Turner | AECOM Hunt JV, along with the committed participation of every trade partner on the master plan project produced unprecedented and outstanding safety metrics on the project.