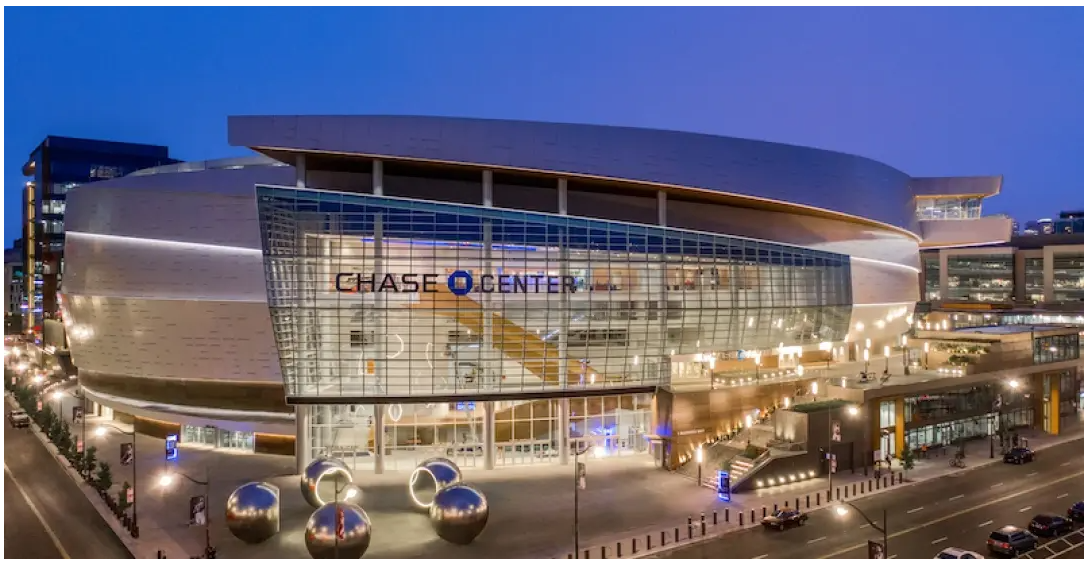 The centerpiece of this 2-million-sf complex, located on 11 acres in San Francisco’s Mission Bay district, is an arena with a flexible seating bowl that can accommodate 18,000 Warriors fans or scale down to a 5,000-seat theater. The complex also includes two office buildings, publicly accessible plazas, a broadcast studio, over 20 retail locations, and a 925-slot below-grade parking structure. The complex is programmed to host over 200 entertainment events per year. A hotel is under construction on the arena’s north side.

This project required 18 months of preconstruction planning, and more than 100 community meetings. Its construction posed logistical challenges, as the site was hemmed in by the San Francisco Bay to the east, UCSF Medical Center’s academic housing to the west, and active construction sites to the north and south. Some 300,000 cubic yards of soil were excavated from the site, and because the site sits so close to Bay, the Building Team held back groundwater intrusion with the installation of H-pile and CDSM cutoff walls, and 1,700 tiebacks.

The construction of the building’s four structural cores was sequenced. The Building Team used a 4D Synchro model that transformed the project’s 36,000-activity P6 schedule into a visual tool that provided a platform to develop, test, and resolve schedule outcomes throughout the lifecycle of the construction process. 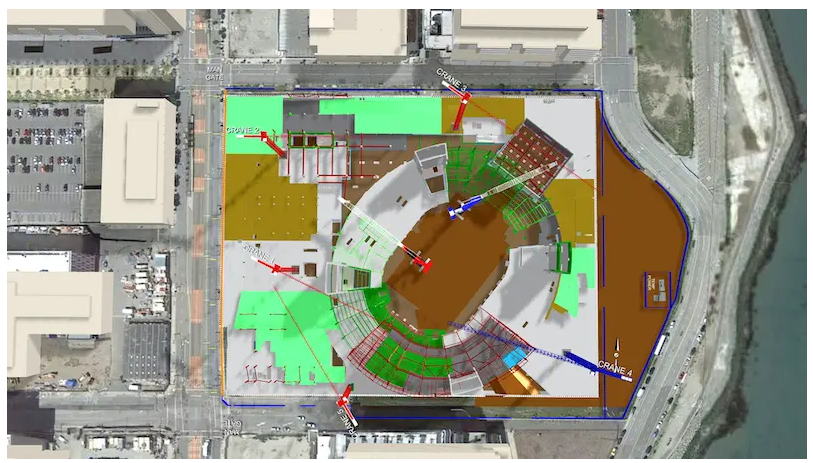 Mortenson Clark, the joint venture construction manager on this project, deployed a 4D Synchro model that transformed the 36,000-activity schedule into a visual tool that helped the Building Team communicate its intentions with stakeholders.

Model coordination meetings involved more than 40 people, and the project’s 31-month schedule was guided by a 200-page “playbook” that detailed every facet of construction. The Building Team also leveraged Virtual Reality to conduct virtual walkthroughs to identify any discrepancies between design coordination and the client’s expectations.

(This project earned a Bentley Systems YII 2019 Award for Advancements in 4D Construction Modeling, and an Autodesk 2019 AEC Excellence Award.)

One of the signature features of Chase Center is its rainscreen enclosure, a massive puzzle of 5,500 aluminum panels that encircle the arena in 14 “drums”—individual bands that ring the venue at different planes. These 3×8-ft panels are affixed to 950 24×8-ft mega panels that are secured to a secondary steel framework.

The Building Team harnessed advanced modeling tools, including Rhino and Catia, to improve constructability, coordination, and ensure each panel was precisely designed, fabricated, and installed. (The panels’ tolerances were only one-eighth of an inch.)

The Building Team and client went to great lengths to ensure worker safety on what was a long and complicated construction effort. Some 9,800 workers from 260 firms put in 5.3 million hours on this project, including the 1,500 workers on site during peak construction periods. 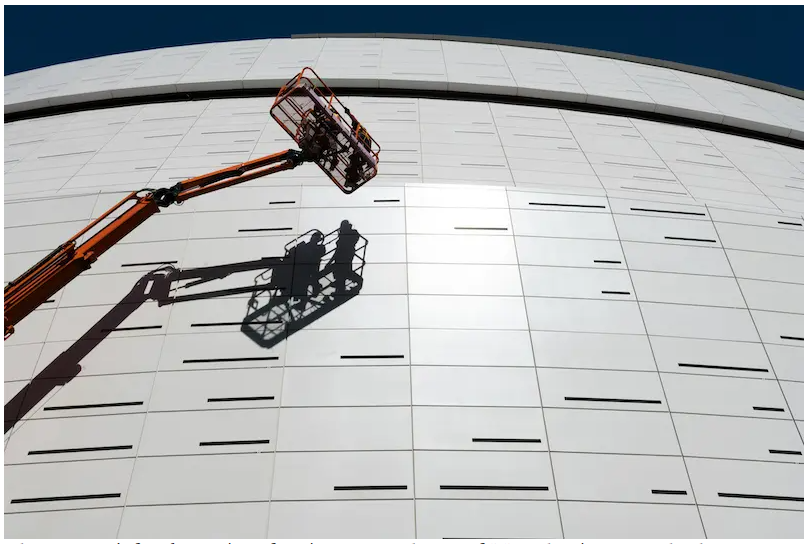 Chase Center’s façade consists of a rainscreen enclosure of 5,500 aluminum panels whose installation allowed for only 1/8-inch tolerance.

The project entailed five crane towers, two crawler cranes, and dozens of boom lifts. Concrete subcontractors placed as much as 3,000 cubic yards per week, and ironworkers set 17,000 tons of steel over nine months. All told, Chase Center put in place nearly $600 million in work per year of construction, and its recordable accident incident rate of 0.53 was six times lower than the industry’s average.

To help track its safety performance, the team relied on a Safety Dashboard that focused on safety observations from the prior day, near misses, violations, and outstanding pre-task plans and worker headcounts. There were 700-plus daily “Plan of the Day” meetings between project field leads and foremen.

“Mortenson|Clark and our partners worked together to build a culture on site that fostered productivity and collaboration,” recalls Trevor DeLong, the joint venture’s senior superintendent. “It was an extraordinary team effort.”

This complex is expected to contribute significantly to San Francisco’s economy. The Building Team worked in close partnership with the Warriors and representatives with San Francisco’s Office of Economic and Workforce Development and Bay Area labor unions. The team made a point to ensure that local entities played a meaningful role in the building process. To that end, $245 million in construction contracts for Chase Center were awarded to small businesses.

“The real measure of success is the lasting positive impact we have on our communities, and we couldn’t be more proud of the outcome and legacy we are leaving behind,” says Viki Bamba Chennault, Community Affairs Director for Clark Construction Group. 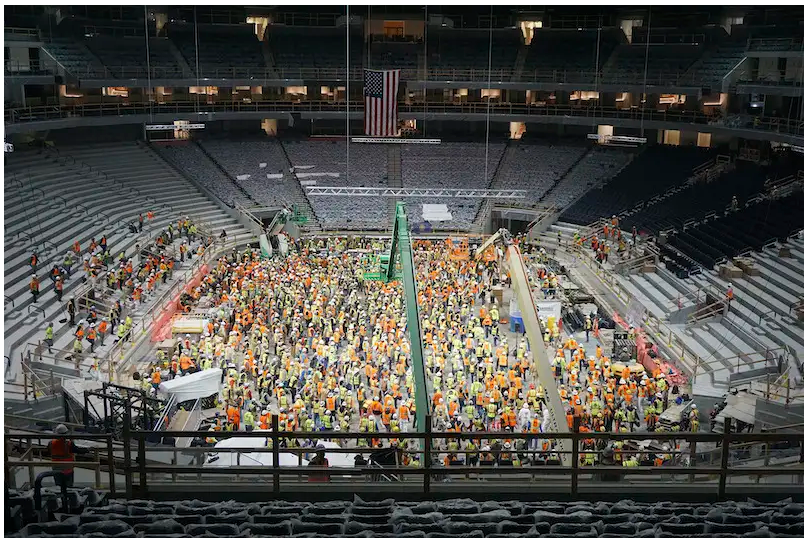 Nearly 10,000 men and women worked on this project overall. Yet, its 0.53 incident rate was six times lower than the industry’s average.

Chase Center’s Building Team also looked to advance the client’s sustainability goals. For example, repurposing waste was a top priority. The team recycled 87% of the project’s construction waste locally, diverting it from landfills. To protect migratory fowl, the team installed fritted glass in the upper locations of the arena. It also installed noise, crack, and vibration monitoring systems to scrutinize the impact of the construction on the surrounding built environment, as well as dust monitoring and controls for air quality during construction.

The building itself features premium finishes, luxury suites whose leases start at $1.5 million, area clubs, a scalable rigging system, and cutting-edge audio-visual technology that is highlighted by a 10,000-sf center-court scoreboard that amasses of more than 25 million LED lights.

The Warriors organization—which funded this project privately—has $2 billion under contract from the sale of tickets, suites and corporate sponsorships from a cluster of founding partners such as tech giants Adobe, Oracle, Google Cloud, Accenture. JPMorgan Chase alone shelled out a reported $300 million to snag the naming rights to the stadium for 20 years. Essential revenue is also being generated by the office towers whose primary tenant is Uber.