SoFi Stadium in Inglewood, California, is the most expensive stadium ever built, even when adjusted for inflation, according to a blog from Construction Disputes.

In fact, SoFi (shown above), which was finished in 2020 and serves as the home of the Los Angeles Chargers and Los Angeles Rams, is more than twice as expensive as the second-highest-cost stadium, when adjusted for inflation. Metlife Stadium, built in East Rutherford, New Jersey, in 2010, cost roughly $2.03 billion in 2020 dollars, compared to the $5.5 billion it cost to build SoFi.

Of the top 30 stadiums outlined by Construction Disputes, 22 are located in the U.S. and five of those were built for sports franchises in or around New York City, followed by four stadiums built in London. 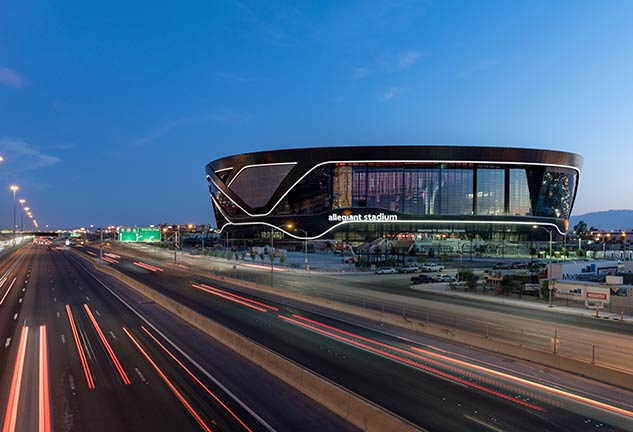 A high concentration of the most expensive stadiums are NFL venues that have been completed in recent years. As popularity of U.S. sports have continued to rise at the same time as technology, franchises have had to compete with the experience of watching games from the comfort of one’s own home. So stadiums like SoFi and Allegiant in Las Vegas, which were both finished before the 2020 season, upped the amenities to create an exciting game-day experience worth the price of admission.

Bigger seats, increased capacity and a larger number of boxes and suites are some of the ways sports franchises are expanding what stadiums have to offer. Additionally, large screens and scoreboards designed to enhance views for every seat add to the budget. SoFi’s double-sided scoreboard, for example, features more than 70,000 square feet of digital LED screens and weighs 2.4 million pounds, and had to be built to withstand earthquakes, Construction Disputes said.

Here is a look at the top 30 most expensive stadiums, their cost, year built and location:

A previous version of this story incorrectly stated the weight of the SoFi Stadium scoreboard at 2.4 billion pounds, instead of 2.4 million. It has since been updated and corrected.