Innovative stadium in southern California to become the centerpiece of a 300-acre sports and entertainment district.

Totally $5.5 billion, the stadium is the most expensive to be built in the world – but that is not the only way it is making history. It is also the first indoor-outdoor stadium within the NFL and features a range of heigh-tech and revolutionary design features to cater to the modern sports enthusiast.

SoFi Stadium is capable of seating 70,000 spectators but can accommodate over 100,000 with standing room. It is also host to more than 260 suites, seven suite concepts and 12 club spaces. Under the same roof canopy as the stadium sits a 6,000-seat performance venue, as well as the 2.5-acre American Airline Plaza, open to the public. The three locations are capable of being programmed together to host one event of can be activated individually.

The stadium has officially opened its doors, hosting its first game on September 20, 2020 between the Los Angeles Chargers and the Kansas City Chiefs. Much more is in store for the stadium, including Super Bowl LVI in 2022, the College Football National Championship game in 2023 and the opening and Closing Ceremonies of the 2028 Olympic Games.

SoFi Stadium marks the beginning of a larger redevelopment of the former Hollywood Park Racetrack site, lead by the Los Angeles Rams Owner and Chairman, E. Stanley Kroenke. Surrounding the stadium on nearly 300-acre parcel will be the Hollywood Park master plan, which includes future retail, restaurants, residential buildings, office space and a hotel. These developments will connect to ta 25-acre community park and two connected lakes, creating a vibrant space that stands for much more than sports.

“Stan Kroenke had a vision of designing a project that would not only benefit football fans, but the Los Angeles community as a whole,” says Jason Gannon, Managing Director of SoFi Stadium and Hollywood Park. “With that in mind, we are creating a mixed-use development that will serve many groups in a live-work-play environment. When complete, Hollywood Park will feature more than 25 acres of public parks and open space for the community to enjoy.” 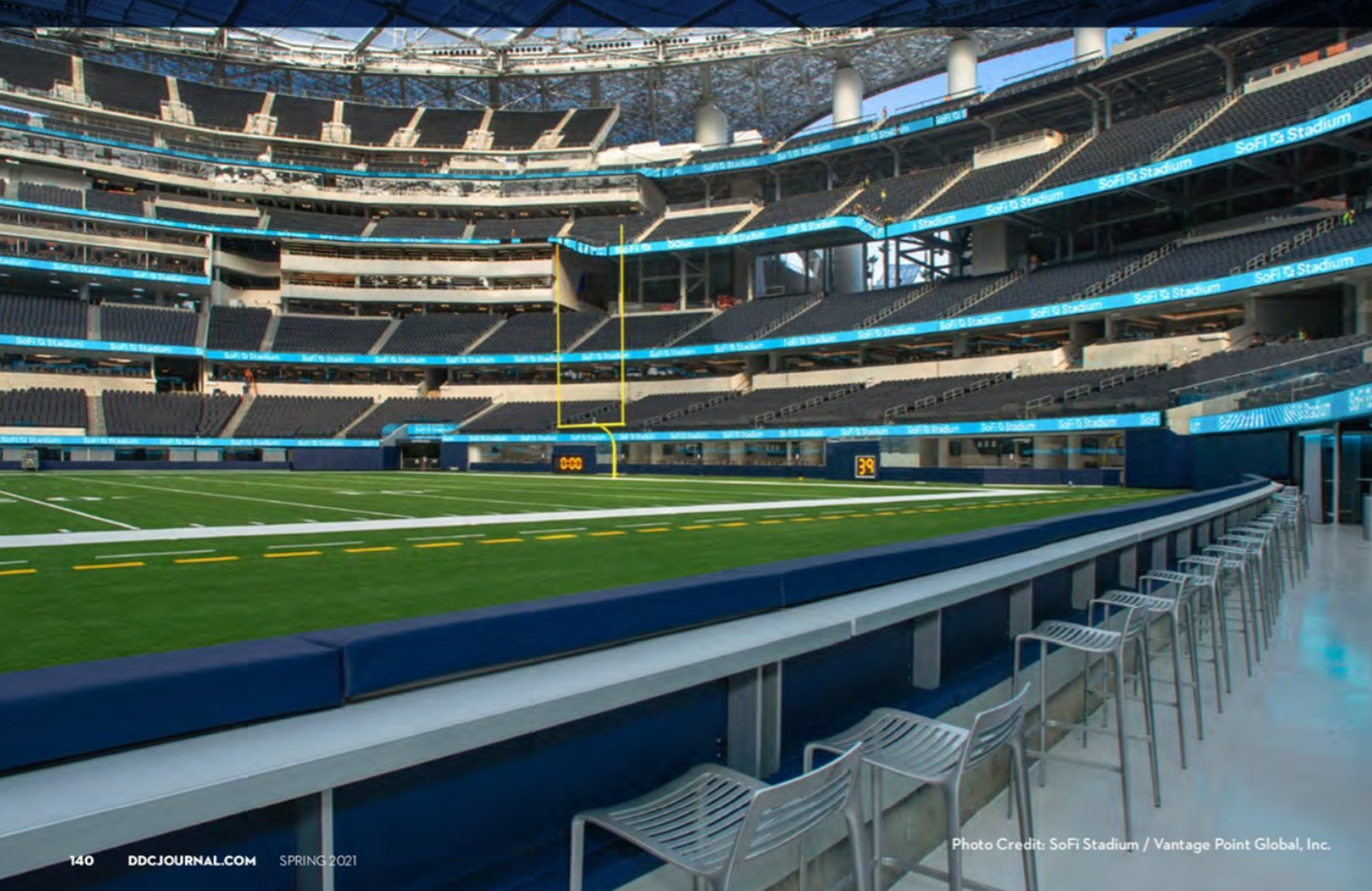 One of the most noteworthy aspects of SoFi Stadium is its revolutionary design, created by HKS Architects. With the team’s intention to create something far from the standard stadium design, the project laces exterior walls and is sheltered by a transparent dome with ethylene tetrafluoroethylene (ETFE) to create an open-air feeling. The stadium itself is sunk 100 feet into the ground, reducing its impact on the skyline from outside while still maximizing its appeal from airplane travelers passing overhead.

“We worked with our architects, HKS, to deliver Stan Kroenke’s vision for a unique design concept,” Gannon says. “Pairing the fan experience with the California indoor-outdoor lifestyle was important to us. We wanted to create a building that was uniquely Los Angeles, and we considered every detail of the stadium in order to deliver on that for our future fans and guests.”

Inside, visitors will be sheltered from the sun’s heat by the ETFE roof canopy, cooled by coastal breezes and engaged by the stadium’s colossal “Oculus” ring hanging above the field – a one-of-a-kind 4K video board that displays on both sides.

At 3.1 Million square feet, SoFi Stadium is one of the largest in the NFL. Of course, a stadium of this magnitude required immense coordination to execute.

“Working on a project of this magnitude presents several challenges. Coordinating the size and scope of the projects was certainly one,” Gannon says. “Working with our general contractor, Turner-AECOM Hunt joint venture, we were able to deliver the first piece of Stan Kroenke’s vision, [SoFi Stadium], to build a global sports and entertainment destination in the heart of the entertainment capital of the world.”

The construction team worked with local subs, such as SME Industries, Inc. as the mail structural steel contractor.

“SoFi Stadium is arguably the most impressive sports and entertainment venue in the world in addition to anchoring a high-end, mixed-use development of retail, office and green space,” says Dieter Klohn, CEO and President of SME Industries, Inc. “SME Industries, Inc. is honored to be part of this landmark project that invites the public, inspires the mind, increase ebullience and exceeds expectations. “We are proud of our track record on SoFi Stadium. We have collaborated tirelessly to deliver and outstanding project with zero lost time injuries.” Gannon and his team also worked with Venue Solutions Group, which provided facility management consulting services for the stadium.

Stan Kroenke had a vision of designing a project that would not only benefit football fans, but Los Angeles community as a whole 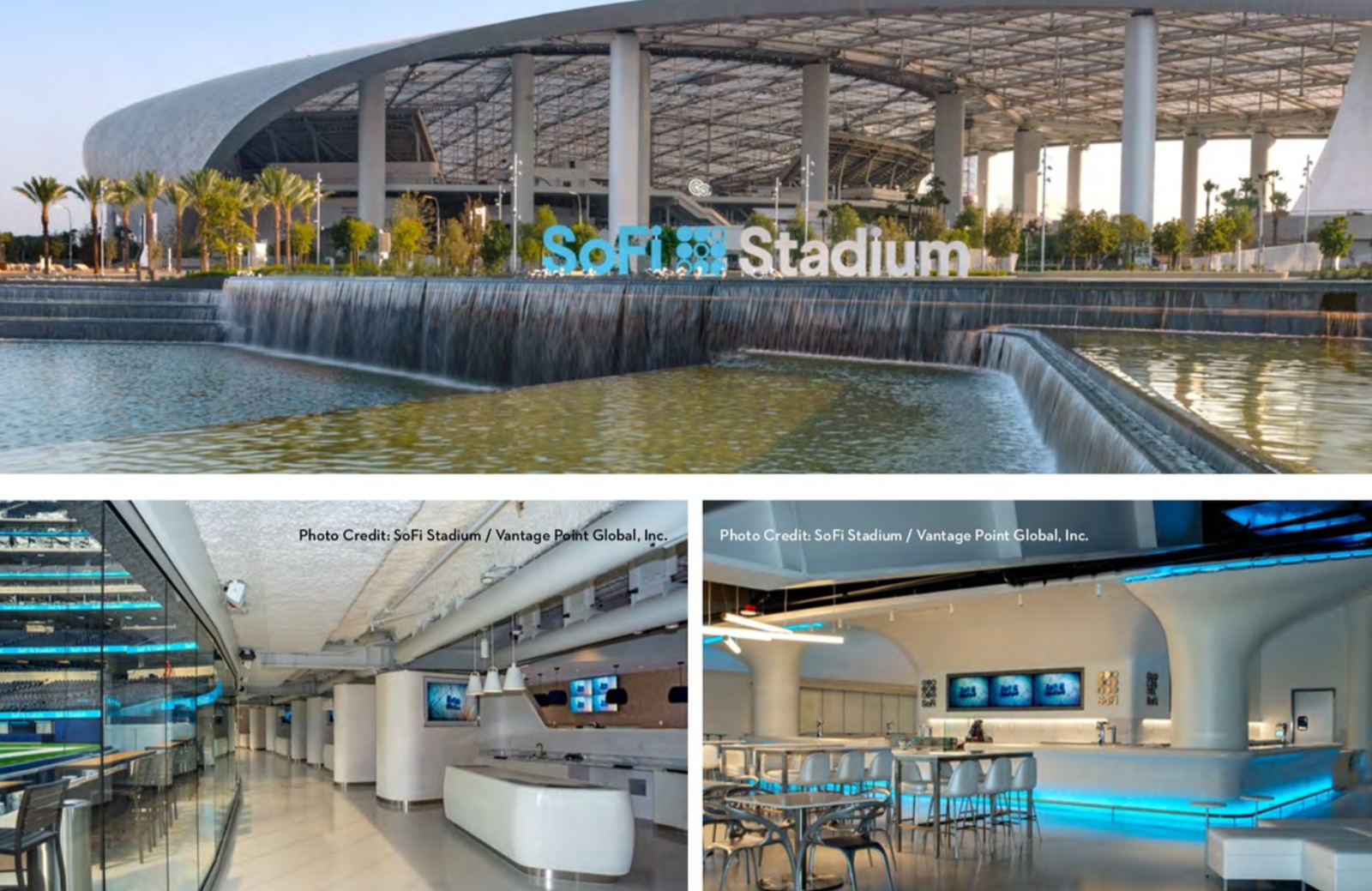 “Our ability to engage the community on this project has been one of our greatest accomplishments,” says Gannon. “To date, we have been able to give more that $754 million in certified construction contracts to over 95 local minority and disadvantaged businesses. In Inglewood alone, residents have earned more than $36 million in wages, with Inglewood business pulling in more than $93 million in revenues since the project broke ground in 2016.”

Despite slight delays in construction progress and the heightened challenge of the COVID-19 pandemic, the end result is truly a spectacular feat. The team will now turn its focus on building the remainder of Hollywood Parks to prepare for the development’s landmark events in the coming years.

“This project is really about Stan Kroenke,” Gannon says. “Hollywood Park is the result of his core competencies – sports and real estate development – coming together. If not for his vision, we would not be here today.”